The DPRK on the Brink of Peace ~ Moonlight Over Pyongyang

The brink of peace?  OK, perhaps it is just the absolute stillness of the night, the crisp fresh air (anything is fresh after a few days in Beijing) and a calm that penetrates the dark night that gives me this feeling of ‘peace’.  Having just arrived in the DPRK, I am still in a bit of a bewildered state.  [FYI: this will be a first in a series of posts written while in the DPRK last week].

I am not sure what to expect, as there does not seem to be anything restless with this calm, nothing but a sense of relaxation.  Of course, being from the USA that immediately sets off alarms as we are taught early on that the DPRK is evil (actually an “axis of evil”), so there must be something dark and menacing out there, correct?!?  The US media and government never distort the truth, do they?  Regardless, my paperwork made it through and I have arrived (although no stamps in the passport…). 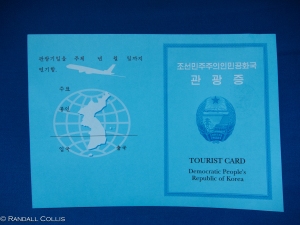 ♬♪♬♪♫ Moonlight Over Pyongyang… ♬♪♬♪♫  Nice title for a song, and I’d love to be able to write something moving to celebrate the peace and tranquility that rests over this city tonight, and I assume every night.  Being a bit ambitious, perhaps a symphony to capture the spirit of people, their hopes, loves and dreams that create such great places as Paris, Hong Kong, NYC and even Cairo.  All places where people are allowed to have beautiful thoughts and dreams, and transform them into great works of art.

Why can’t Pyongyang and all of the DPRK one day provide the world with the same?  Strange thoughts on my first night, as I admit I am quite skeptical of just about everything the DPRK could offer.

That said, flying into the DPRK and to the capital city of Pyongyang, I was pretty stunned by the beauty of the countryside.  A blanket of green consisting of mountains, trees and farmland that left me wondering what was in store for the week as we descended into the city.

Sunset in the DPRK 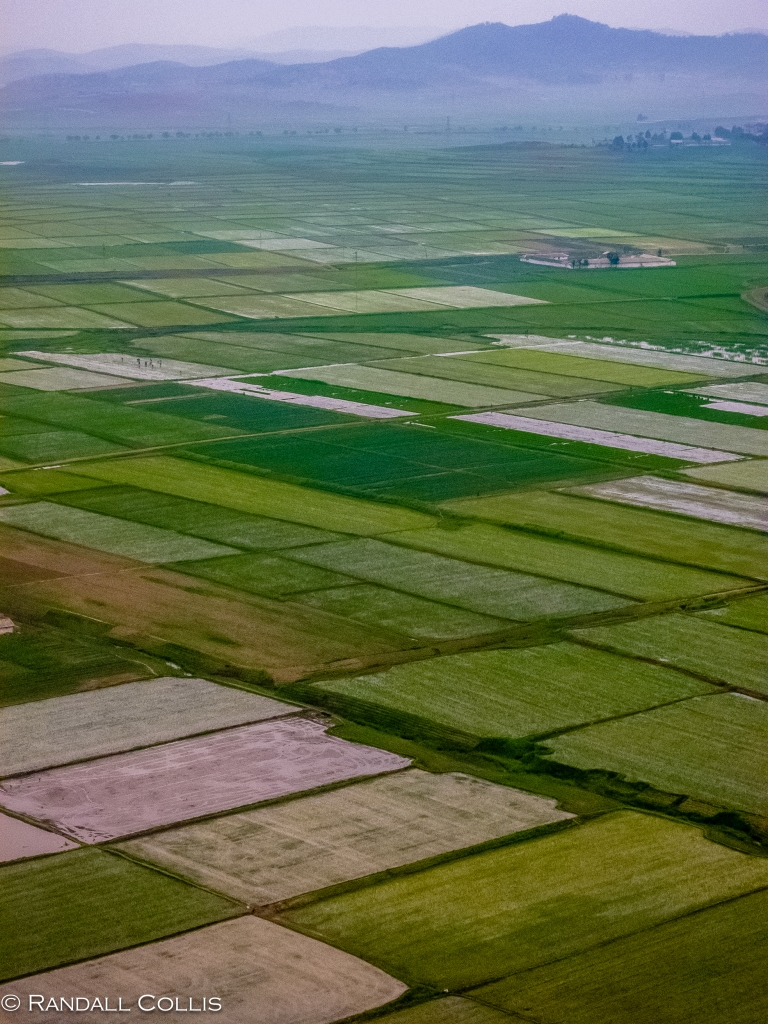 With only one evening in the DPRK under my belt, I’m not sure I am qualified to attempt any such eloquence as song or poetry.  Perhaps on my way out of the country, inspiration will hit and I can try out my talents on DPRK Immigration officials.  For now, the only thing I can offer are my expectations coming in.

Expectations are easy.  As I mentioned, I am American and we are pretty much programmed to expect a brutal regime where its citizens will look upon us with some disgust.  These days, internationally, that may be par for the course as the US government makes Americans easy targets in the international community.  While discomforting, it does emphasize why I love the USA all the more, as freedom should never be taken for granted and understanding the good along with being able to speak freely of the bad makes a true patriot.

Of course, growing more cynical as I get older, I trust all media (and governments) about as much as I trust the Pyongyang Times…  A wonderful paper, if you like pure propaganda at its flowery best (it gives the old China Daily of the 90s a run for its money).  Something to think about: propaganda machines are just about everywhere (FOX news, CNBC, Pyongyang Times, etc.), whipping up stories with sensationalism to back a belief they want to be taken as fact.  Difference here, in the West we have a few more choices and resources to find the truth for ourselves.

Funny thing about the Pyongyang times, in the DPRK a photo or image of the great leader (Kim Il Sung or Kim Jong Il and current leader Kim Jong Un) must be treated with “great respect.”  What does this mean?  Well, for example, the copy of the Pyongyang Times that I received on the plane should not be folded in half as it would create a crease on the leader’s face.

The newspaper we were given on the plane were given to us flat, so when it came to putting the paper away, the only way to get around this was to fold the paper in thirds.  Pretty easy solution, except when I went to read the inside pages, I had severely creased all the other photos of the “great leaders” on those pages…which upon viewing, the person sitting next to me joked “We’ll see you again in about 10 years when you’re released…”  Sometimes, there is just no way out.

Also, another great piece of info to pass on: throwing a newspaper away with the photo of one of the great leaders on the cover is disrespectful as well…so I suppose you will forever see me holding a “folded-in-thirds” Pyongyang Times from here on out.

One person said upon hearing this: “where the heck do they put all the old papers if they can’t throw them away?!?”  Good question.

Blue Hour on the Taedong River

So as I look out onto Pyongyang, I wish for some solitary music, something to catch the spirit of this place.  I come up empty.  Rather, I can imagine a deep, somber beat of footsteps trudging onwards playing in my mind…music to represent the worry about the life their children may have: uneasiness, with little opportunity for expression.  Perhaps it is this silence that I am hearing.  Silence like this tends to make men and women fight to create a better tomorrow…although I expect if I mentioned this to one of our guides, they would say “Of course, that is what happened on June 25th, 1950 and we achieve this goal.”

While I have had very little time to get a feel for the DPRK, it does not take a sociologist to understand that there is a chasm between “us” and “them”.  A very stoic society, and with all this deification of their Dear Leaders blazing from almost every building and being pushed onto the local population…can they even grasp what “the real world” is like? 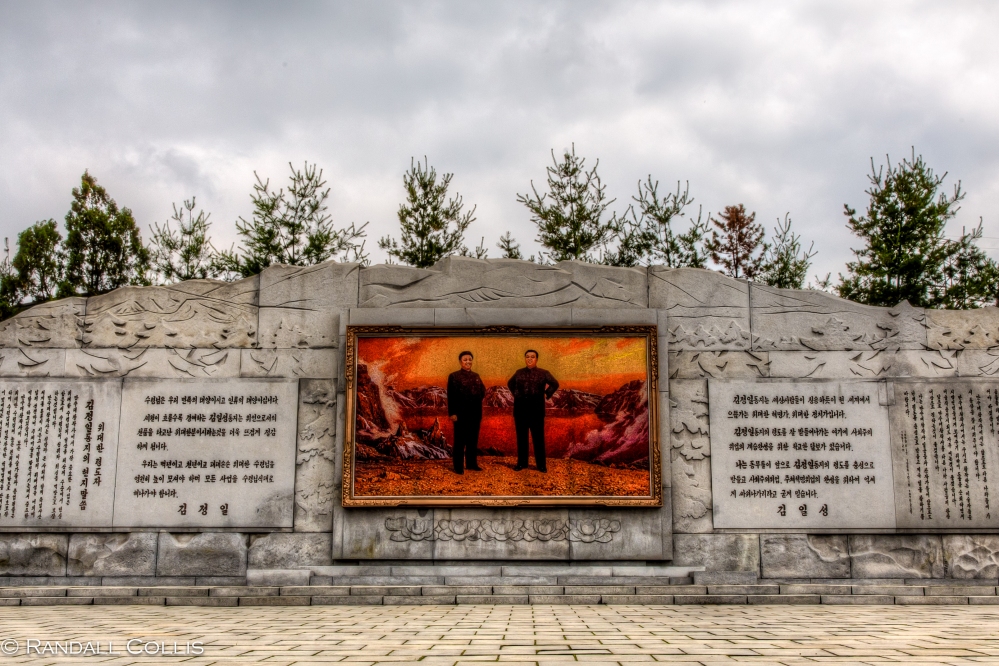 With the rain coming down as we came in, I did not see many people out and about, so the quiet, greying weather perfectly matched my expectations on what I would see in Pyongyang.  A dull, grey machine that does not have any noticeable human parts.  Not to be trivial, but the DPRK does not have the best PR in the States.  Whether my feelings will change after a week, who knows?  It will be fun to see how I picture this place after a few days, and hopefully the weather will pick up.

As for our hotel, it is actually pretty brilliant.  Fills every expectation of a pre-80s Soviet/Communist Hotel: dated, but solid and with a little bit of intrigue.  We are staying on Yanggak Island at the Yanggakdo Hotel, also know as the Alcatraz of Fun (via the Lonely Planet guide-book) as foreigners are allowed free rein on the island, just don’t think of leaving the island on your own.  Hotel California may be a better name.

Central Pyongyang Photo of Yanggakdo Hotel in the Distance

It would have been great to have had the opportunity to stay at the above pictured monstrous Ryugyong Hotel, which pretty much dominates the Pyongyang skyline (the largest building), yet after 36 years since construction began, it is still unfinished.  I believe that falls into the category of “white elephant.”  It does serve as an example of how the fall of the USSR hit the DPRK hard, crippling its economy and stopping all major construction.  Not sure what its future will be, but there are still discussions of the Ryugyong becoming perhaps another ‘Hotel California’, an enclosed enclave for foreign guests.

As for now, I sit at my Yanggakdo Hotel window very tired and smugly admiring my Canon 70-200mm lens.  I say “smugly” because technically it is illegal to bring a 200mm lens into the DPRK…nothing like being a little bit of a rebel.  Although, truth be told, the worst that could have happened is they would have taken the lens and held it until I exited the country, and I brought the lens specifically as I heard that DPRK customs have been flexible with foreigners bringing in a 200mm lens (I am not that brave, especially with my camera equipment).

As one of my good friends told me: “taking your 200mm lens that is technically illegal to bring into the DPRK…yeah, I can see this is going to be an eventful trip for you…”  My final shots of the first day: 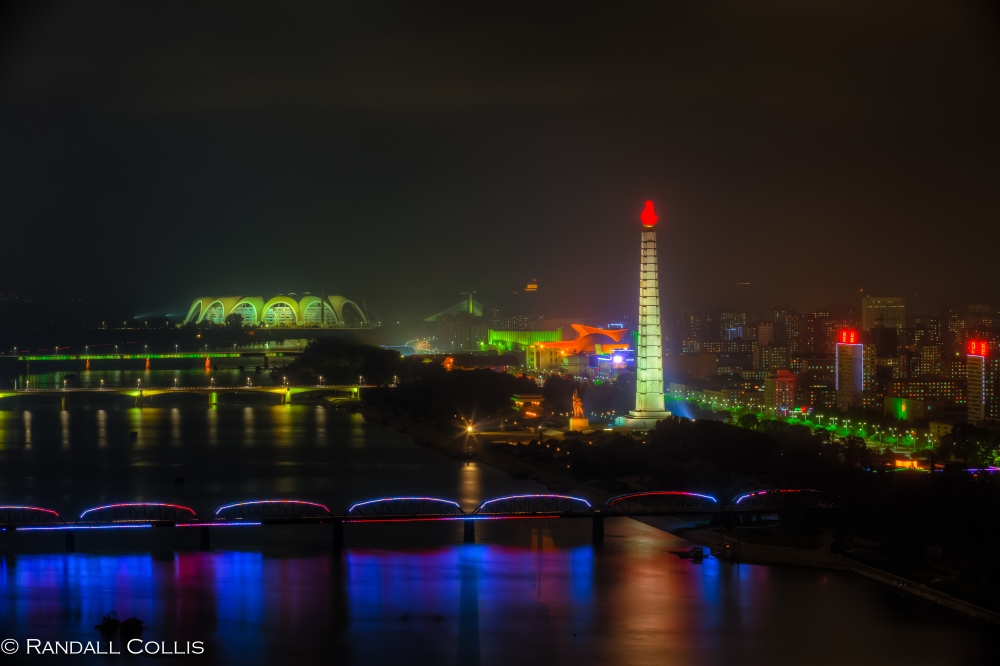 Looking west of the Taedong River (right hand side), you have the Juche Tower in its nighttime glory (along with the lights of the Workers Monument and May Day Stadium). 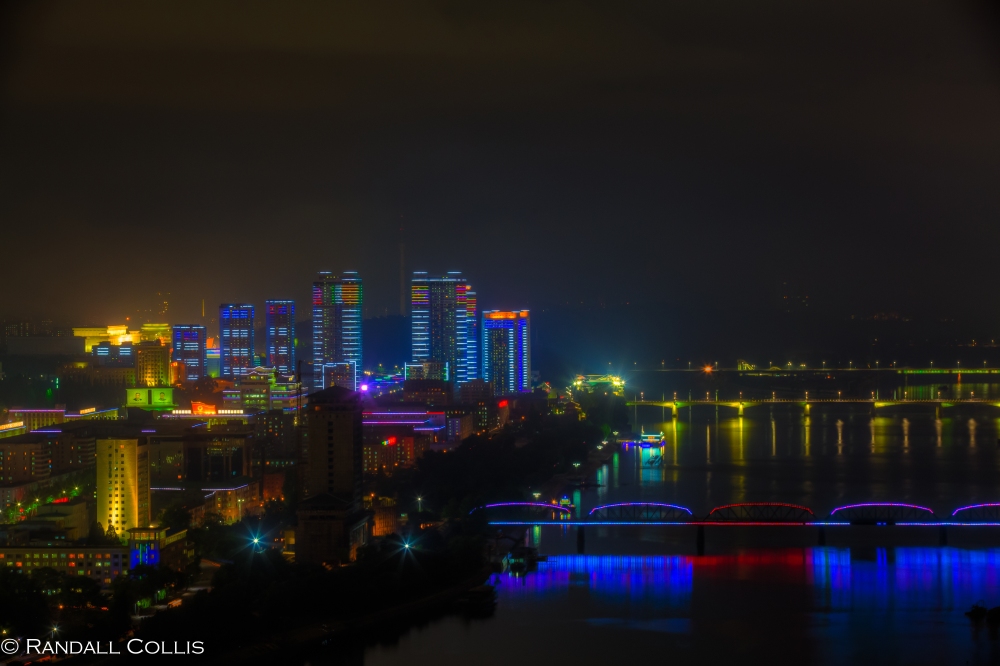 Looking east of the Taedong River (left hand side), you have the Folklore Museum, Kim Il Sung Square, Mansudae Theater and Pyongyang Pavilion and department store.

I would like to imagine that in those well-lit areas of the night, the streets are teeming with people strolling, kids playing and lovers dreaming…but the silence I hear outside makes this thought far-fetched.  So the symphony I wish to compose will just lay in my head, waiting for another day.  I heard there is karaoke, a casino and bowling alley in the basement of the hotel, so I just may head there instead…