Prior to leaving for the DPRK, I had kept my eyes on any news between the North and the South, especially in regards to the Kaesong Industrial Region.  The DPRK had shut down the factories in this region the month prior, causing great tension between the DPRK and the rest of the world.

While impossible to fully understand what the logic was behind the shut down, outside of political rhetoric between the two sides, there did not seem to be too much worry about anything spinning out of control.

Little did I know that with just about 24 hours remaining in my stay in the DPRK, it would be the backdrop to the biggest surprise and one of the most interesting moments of the trip: ♪♬…You say you want a revolution…♬♪.

Each new day in the DPRK has had times where I thought, “this is the coolest moment”, and usually it was something relatively simple yet unexpected.  On this day, there was an unexpected moment that went beyond such simplicity.

We had returned to Pyongyang from Kaesong by mid-afternoon and the plan was to make our way to the Juche Tower to spend the afternoon atop the tower for a panoramic view of the city.  From there, walk around the area.  However, as we worked out way into the city, our car kept getting re-routed by sudden road closures.

This was baffling to our driver and guide, as they clearly did not understand the reason behind these delays and closures.  One positive, though, it did give us a chance to view other parts of the city, and watch the afternoon activity.

As we wound our way around the heart of the city and crossed the river, we finally arrived at the Juche Tower, losing about an hour due to the re-route.  It was a minor concern, as the tower closed at 6pm.

Being an hour late, though, had its benefits as the light was a bit warmer nearer to sunset, and made it possible to catch softer reflections off the Taedong River.

Arriving on the viewing platform of the Tower, we saw a pretty amazing sight: Kim Il-Sung Square, which was supposed to be filled with people practicing for the “Mass Games” as I had shown in earlier photos, had turned chaotic.

Today, it was filled to capacity with red banners and chanting citizens.  A loud protest.

While we did not know what the protest was for, we later found out it was in regards to the South Korean government not re-committing to talks on the ‘Special Administrative Region” in Kaesong.

There was a buzz that perhaps Kim Jong-Un would show up and give a speech, but our guide quickly said that would be impossible as he was not believed to be in the country, but the look in her eyes also said ‘wouldn’t that be special to see him speak!’

The chanting, the banners and the mass of people packed into the square was pretty invigorating and kind of emotional.  To be honest, part of me was hoping that this mass protest was just beginning and soon emotions would erupt around the country and people would flood the streets demanding democracy…and we could see something powerful, similar to what had happened in Cairo, Egypt.

It did not take much to realized that the situation in the DPRK is different than in Egypt, and to have such mass protests would be disastrous.  Baby steps are needed here.  The voice of the people in Egypt can be heard…where as in the DPRK it has been muted for decades.

This protest, however, was exciting as there was passion.  So I began begging our guide Ms. Kim to take us to the protest so we could become involved…to which she laughed and said I really was a troublemaker.  No such luck.

The area of around the Juche Tower was pretty normal, no sign of the protest activities influencing anything on this side of the river.  It was pretty clear that the protests were well choreographed, although it was said to be “off-the-cuff.”  Any protest under a Totalitarian government I assume would have to be sanctioned, the people simply do not hold any power.  Nonetheless, very intriguing.

It reminded me of films I have seen regarding protests in China 50 years ago, a bit of a surreal moment that felt like I had walked back into time…detached from all the emotion, except for the physical experience of being there.

As we continued our tour of the eastern part of Pyongyang, my attention kept being drawn to the chanting on the other side of the river…  The feeling to believe in something so strongly with all your countrymen is a phenomenon that is becoming increasingly rare, which makes it more powerful.

The sun is going down on all Totalitarian regimes, and the voice of the people will be heard.  It is hard to argue against democracy.  I do agree with Churchill who once said, “Democracy is the worst form of government, except for all those others that have been tried.”

The red banners flying freely in the wind on Kim Il Sung Square made an impact.  They showed unity, and it is not so different from the Spirit of ’76 and shows the passion for freedom lives within everyone.

It is not too hard to sort through all the different cultural aspects and language barriers to see the common thread of pursuing hopes and dreams.  A spirit that rings true in the populations of every nation on Earth, and should inspire us all to take advantage of our opportunities.

It is the eternal optimist in me that believes in the DPRK, when the people speak a young leader, with a grasp of the modern world, will understand that it is his job and legacy to bring these voices to the world.

It is the surest path to evolve into a stronger nation, and to give a population a new path to chase their dreams. 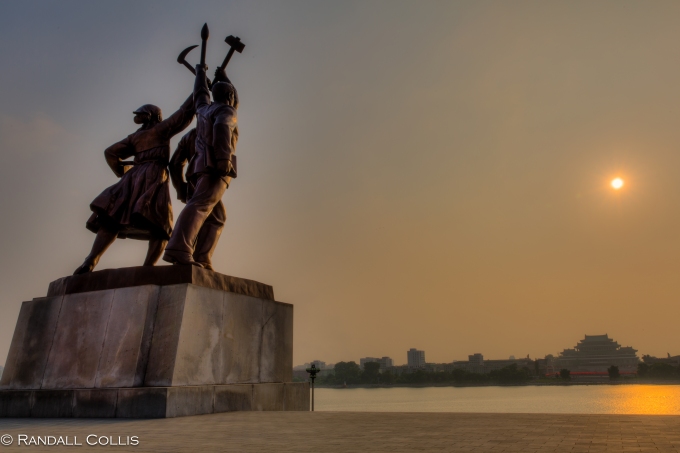