The Sparrow and The Red-Crowned Crane

A small sparrow was weaving her way down along the tree line, darting in-and-out of its branches before quickly changing directions and taking a steep dive over the riverside grasses.  With a slight shift of her body she then swiftly rose again, up over the treetops.

The morning air lifting her higher and holding that crispness of winter that she found so refreshing.  It was the same bite of cold that sent all her friends south, leaving her alone.

She chirped happily remembering how her loneliness was quickly replaced by the call of adventure.  To explore the winter world and its forbidden culture. 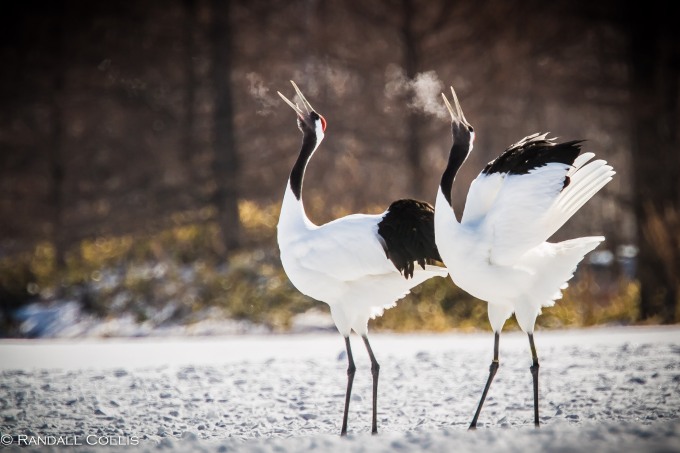 The beginning of this quest happened during her migration south, when she became enchanted with the most graceful and serene bird she had ever seen, the red-crowned crane.

The mythical status of the crane was well-known in her world, a symbol of longevity and peace: the prince of all feathered creatures. Until now, their secret world was impenetrable, for as a lowly sparrow such a life was impossible to imagine…until fate intervened.

As was often the case, she was again late and had to wake up early, prior to daybreak, and fly to catch up with her host of sparrows heading south.

She darted around the landscape but could not avoid the feeling her life was about to change. She rounded a bend within eyeshot of her host when she became drawn to the frostbitten dew below; glittering as dawn’s rays were captured in frozen prisms along the river. 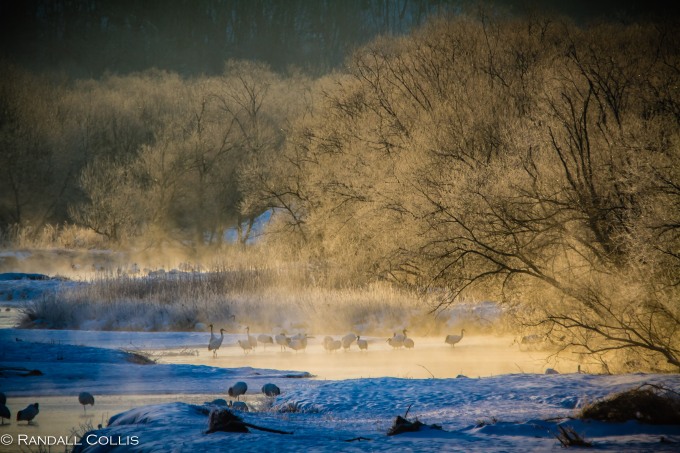 She saw this as an invitation of adventure; the chance to create a new path and without hesitation she slightly arched her left wing and veered from her patterned route and soared into a new world.

“They thought that it would be a disgrace to go forth as a group. Each entered the forest at a point that he himself had chosen, where it was darkest and there was no path. If there is a path it is someone else’s path and you are not on the adventure.”  – Joseph Campbell

Amid the fog, an impressive red-crowned crane was enjoying his quiet morning. The frost and fog along with the thin shield of ice along the riverbank had made fishing for his breakfast much easier, so after eating his fill he had time to appreciate his surroundings.

He had wandered far from his friends, uncommon for red-crowned cranes of his stature but he did not care. His mind drifted off to a very strange sight, a simple sparrow balanced on a low-laying branch mesmerized by the frozen dew crystals dancing with the morning sun.

While normally a common sight in autumn, he knew a single sparrow perched along the side of the river in the dead of winter was a very, very rare thing.

With a grace he had only recently acquired with age, he danced along the water as if he was the Gene Kelly of the avian world, and called out to the sparrow, “Why, little sparrow, are you resting here along the riverbank as winter takes over the land?” 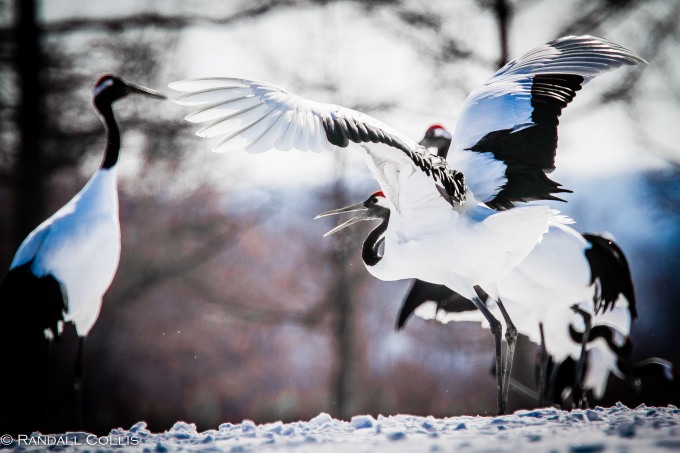 “You should be well on your way south, along with your friends…”

The sparrow looked up and smiled, “I was, but then I saw this river and the beauty of winter so alive this morning that I thought I would stop and join you.” She opened her throat as to sing a song, but an unexpected shiver interrupted this plan.

The crane looked at the determined sparrow, and said “when I saw you careening through the trees, along the grasses and then skimming over the river, you added rare elegance on a cold winter day…”

The sparrow tweeted happily and briefly the crane thought if birds could blush, this sparrow would look more like the fabled red robin, aglow in feigned embarrassment.

The crane looked into the proud eyes of the sparrow and saw the strength he long admired: a species of bird famous for the fact they would rather starve themselves to death than be bred in captivity.

The sparrow started singing, and the crane could not hide his admiration for the great spirit of this little bird.

Humility, such an honest and great trait to have he thought to himself.

As the sparrow alighted on the crane’s back, the crane turned and shook his head slowly and added, “this winter weather has turned for the worse today and seeing as you are only in a light coat of feathers this is not a good thing…”

The sparrow, looked up and was a bit shocked at the increasing chill even with the sun coming up, and merely nodded and fluttered her wings.

A seed of despair entered her mind as she thought about her decision to break from her host, but it was quickly erased with the possibility of the day.

“What you say is true” shivered the sparrow, “I do not fully understand why I did not migrate, yet it does not matter as that moment has passed. Rather, it is our talk and experiencing this winter-wonderland I aspire to…” and quickly she took off in flight to warm herself before resting onto the crane once again. 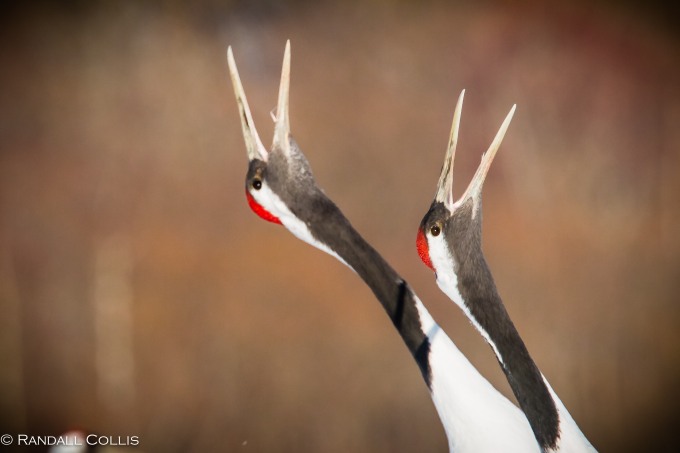 “My days are filled with song, flight and freedom which makes every day an adventure.” The sparrow chirped and sang proudly, “and while true we are rather insignificant in the avian world, we are rewarded with a richness of life most can only dream.”

The crane smiled at this energy and sang too, although knowing his voice was no match for that of a sparrow.

A sharp chilling wind whistled down the river, and the two birds looked at each other. “What I will do this winter is what I always do.  I will share with you my song, my spirit and make do with what life brings my way…” the sparrow gracefully stated.

The red-crowned crane whooped and pranced around, and for a moment the sparrow felt humiliated, scolding herself for even considering why such a regal bird would create even a little time for her.

She took a deep breath and set off into the cold wind to find whatever destiny lay ahead when the crane began to speak.

“To spend such time with a living creature such as yourself, someone with strength, vitality and perseverance seldom found in this world would be an honor for both myself and my friends.” mused the crane.

And as he spoke those words, he struck a pose as if he was courting the queen herself! 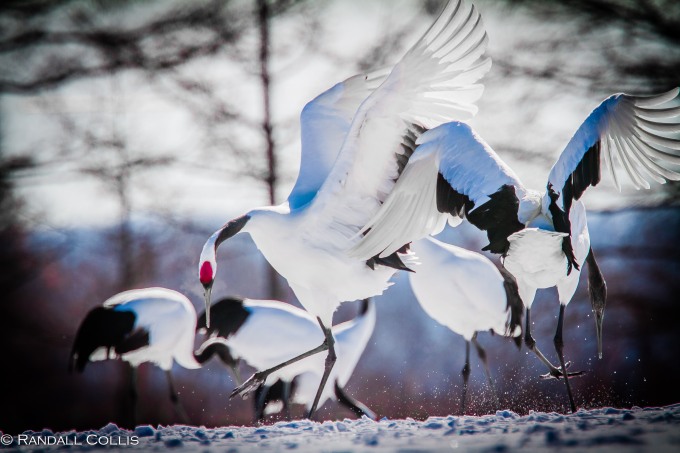 The sparrow laughed, and sang a song sweeter than any crane had heard before. In return, the crane broke out into a little jig, not caring how ridiculous he looked. This caused the sparrow to sing even more beautifully.

“There may be mythical stories about us as we keep to ourselves and our population is few compared to sparrows…” the crane spoke breathlessly, “but in the end we are all brothers and sisters.” 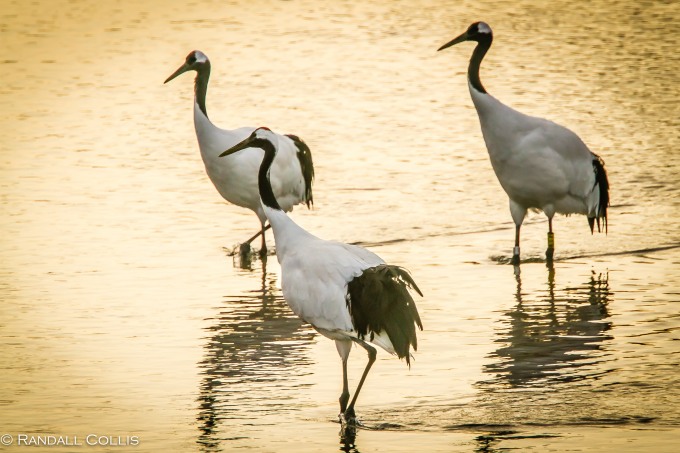 The song of the sparrow took on a different tone, and the melody changed as the beak of the sparrow started to chatter a bit more as the icy northern wind swooped in.

The crane laughed, not an unkind laugh, but an admirable one at the courage and spirit of this little sparrow. In front of her stood a brutal day of winter, a day that would certainly lead to her demise, yet she was still full of hope. Inspiring.

The little sparrow flitted around the crane and swept its right wing just over the water causing a ripple…before returning, shivering to his shoulder again; hope and honesty in her eyes.

“Little sparrow, come with me back to my home and you can bathe in our hot springs and dine on our fine grasses…”

Seeing a small sign of relief on her face, the crane added, “your song is angelic, enough to turn any bone-chilling winter into a warm cup of tea…and may I ask in return you teach us your songs of life so we may dance and sing ourselves throughout this winter and learn more of your wonderful world.” 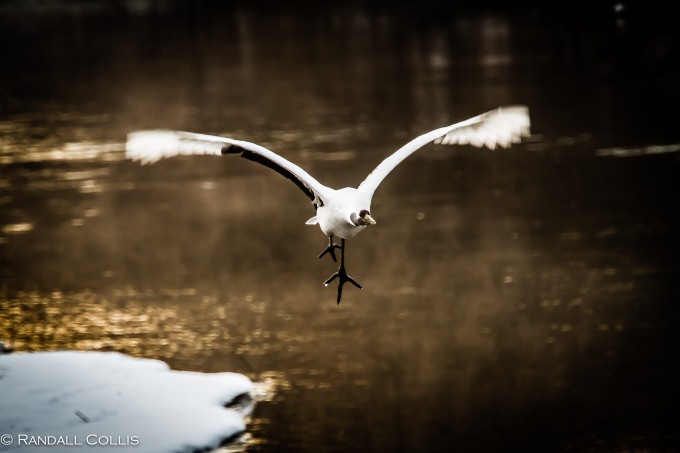 Such words were music to the sparrow’s ears as the cold was quickly making both flight and song difficult. She smiled and tucked herself next to the crane and together they parted~ to make it through the cold of the winter and into the glow of spring.

***  This story was partially inspired by an old Burl Ives children’s song The Robin my twin sister Kim and I used to listen to over and over again when we were young (and for my Mom’s patience for letting us do so). Also it reflects the debate in China of choosing a national bird, with both the sparrow and red-crowned crane being the top choices.